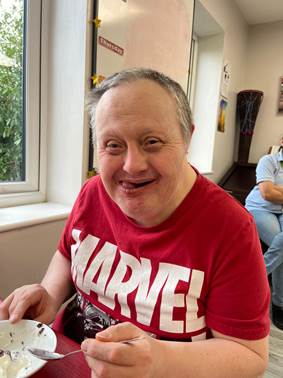 Because we have a couple of residents with dementia we thought we’d do something just for them and the idea of a Dementia Cafe was born!  We asked our two residents with dementia to tell us their favourite cake – they both chose chocolate brownies!  To accompany our home-made brownies, we played 60’s records and old games such as ‘Guess Who’. This was to stimulate memories for our two dementia residents and to give them a sense of familiarity.  To make the event as dementia friendly as possible, we reminded our other residents to keep sudden noises to a minimum and to speak clearly and slowly with each other.  The afternoon was a huge success and so worthwhile especially when one of our dementia residents said: ‘Thank you very much, I enjoyed that a lot.  Are there any more brownies?’

We also hosted a special session on dementia as part of our already successful programme ‘Chat with Matt’. Matt, one of our support workers was the inspiration behind this idea.  He recognised that because our residents live with a variety of mental health conditions, it can be challenging for them to understand each other’s way of communicating. With help from Debbie, our activities co-ordinator and one of our nurses, Elizabeth, he set up the now very popular ‘Chat with Matt’ – a safe space where the team discuss different mental health conditions to give our residents a better understanding of each other.

In our dementia ‘Chat with Matt’ session we played a memory game.  With the residents positioned in a circle, they had 10 seconds to pass a ‘thought box’ round to every person in the circle.  They then had to do the same task but spin in a circle first before passing.  This showed them an example of early onset dementia.  We were also able to develop this game to show what it’s like when someone has late-onset dementia as well.

After the game we shared information on how people with dementia can struggle with processing information, memory loss and explained the cyclic behaviours that can seem odd to others.  All our residents felt they had a much better understanding of dementia and had fun in the process! 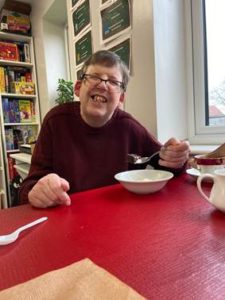